Denver Law Externships Director, Professor Alexi Freeman was quoted in a National Jurist article highlighting the new ABA rule allowing law students to perform externships for both credit and pay, noting that the high cost of tuition is “real and quite crippling” as a reason Denver Law is leading the way under the new ABA policy. 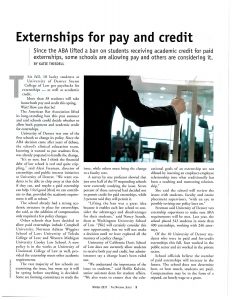